I have been thinking a lot about how January brings back many memories for me. I used to relish the cold and the crispness of winter. Today, I think about staying warm, 24/7.

Winter hunting was something I used to enjoy doing, especially with my Dad, brother and other family members. January was the perfect time to hunt rabbits. Never being much of a shot, any success I had was because I used a shotgun. I could never hit anything with a 22. When we were between the ages of 10-16, we lived for the sport and spent countless hours traipsing around the hillsides of our farm.

Back in the early 1960’s our area had a rabbit infestation problem. Rabbits were plentiful, and in some areas a nuisance. Rush Island was one of those places. The island was created when the Big Muddy created a new path around a raised area in the river bottoms during a flood. Small game was trapped and with nature taking its course soon became over-run with rabbits.

Prior to being elected county Sheriff, my Dad had a bulk oil distributorship with a regional oil company. He was fortunate to have many of the area farmers for customers, many becoming life-long friends. We were invited to partake in the annual rabbit hunt. Those were memorable moments for me and at the time, I did not think life could ever be better than that.

As I remember it, the hunt was on a weekend. Perhaps 10-15 of us would meet in the bottoms across from the island. We would take small boats over after loading them with dogs, guns and supplies. With the crisp January air, the beagles would soon be barking and on the scent. We could track them as they slowly brought the rabbit around to us! While we had to push through the brush and briars, we soon ALL had our daily limit. In celebration of a successful endeavor, out would come the gallon jugs of home-made wine every adult seemed to have with them. Wow, that was potent wine, even if we only got a sip or two from each jug!

This January it seems colder than usual to me. While I have thoughts of the old days, I have to say the fire in the fireplace now gives me as much pleasure as listening to beagles run on Rush Island. Growing up, we never know what memories will stick with us, perhaps now is the best time to be alive.

See you next month. 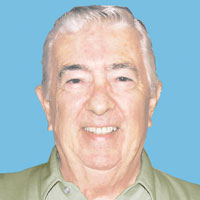